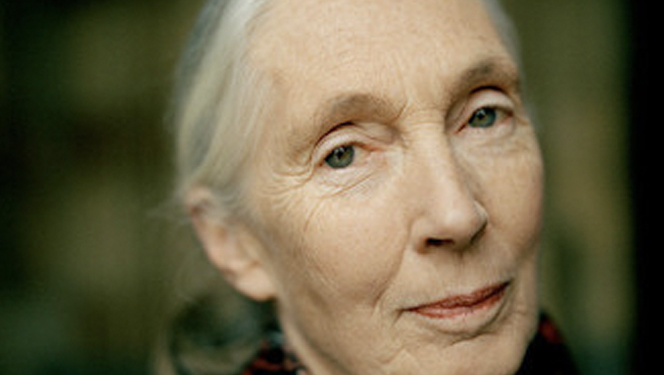 What kind of difference do you want to make? Responding to Jane Goodall's call to low-carbon living

With the impact of climate change becoming clearer by the year, we are hearing more and more prophetic voices challenging the way we live. Greta Thunberg is one such voice, traveling to international meetings by train and advocating others do the same. Another such voice is the renowned conservationist, Jane Goodall, who has been speaking this month to packed-out venues in Australia and New Zealand.

Dr Goodall's headline message is, "What you do makes a difference, and you have to decide what kind of difference you want to make." In part this is about making small pro-environmental changes in your own life. In preparation for her trip to Australia, Dr Goodall argued that "the consumer must take responsibility," adding: "the accumulation of millions of ethical choices will certainly make a difference ― and it's beginning to happen."

These two strong women also promote systemic change, and Dr Goodall's visit fortuitously comes at a time when many environmentalists are desperate to finally see climate as the top issue for the federal election. The choice presented to the voting public is clearer than ever, now that one of the major parties has all but given up the pretence of caring about the climate. Thankfully, voters' concern for the climate is currently at an historical high.

However, Dr Goodall and Greta Thunberg are also saying that to make the difference needed, we must use means at our disposal ― including change at an individual level. At an alarming rate this planet, our only home, is losing the delicately balanced systems which have created the conditions for life as we know it. The grim challenge presents itself almost daily through the media: our high consumption lifestyles will have to change.

This is a message that activists have instinctively drawn back from, because of the perceived misplacement of blame onto individuals rather than societal systems.

Moreover, past attempts to promote lifestyle change have largely been unsuccessful, as Doug McKenzie-Mohr persuasively shows in his book Community Based Social Marketing. It would be interesting to see research on the real-world effects of admired activists recommending individual lifestyle change at this time, as the climate emergency deepens.

Individual lifestyle change is currently being championed globally by Living the Change, a spiritually-inspired initiative which promotes climate-friendly lifestyles. Drawing from the world's great religious traditions, it promotes a culture of living more simply and caring about the consequences of our choices, standing against the culture of consuming as though there are no planetary limits. The campaign has been gathering momentum since it started in early 2018, and is promoted locally by the Australian Religious Response to Climate Change (ARRCC).

The moral case may be obvious, but does Living the Change avoid the pitfalls of past failed attempts? In short, yes ― as much as possible. Let me explain why.

To begin with: what doesn't work? McKenzie-Mohr cites study after study to conclude that pro-environmental education on its own, even when it is well-resourced, has little to no effect on behaviour. He adds that "this does not mean that providing information should not be a component of a behaviour change program," but of itself it is not enough. Even holding pro-environmental attitudes does not normally lead to pro-environmental behaviours. Again, the "attitude-action gap" is very familiar to policy analysts and researchers.

To make things more complex, sustainable living can be motivated by a range of values quite distinct from a sense of environmental responsibility. In her interviews with people engaged in low-carbon lifestyles in the UK, Rachel Howell found that their concerns with social justice, community, frugality and personal integrity were more important motivators than concern about "the environment" per se. Although ecological values were important to participants, they tended to score altruistic values significantly higher, values such as concern for poorer people who would disproportionately suffer from climate change.

Finally, Laurie Michaelis of Living Witness in the UK, one of the minds behind Living the Change, cautions against framing the need for behaviour change in negative terms. People expect to feel guilty, and this is disempowering.

McKenzie-Mohr outlines several factors which help make it more likely that people will adopt lifestyle changes ― such as:

perceiving the changes as being rewarding.

This last point is related to conversations, because research shows that people who voluntarily adopt pro-environmental behaviours actually find that their well-being improves. People who make the changes can talk about how their health has improved by eating a more plant-based diet or cycling, or that they simply feel good about themselves because they're more aligned with their life purposes.

Living the Change as sound and effective

"Living the Change: faithful choices for a flourishing world" (its full title) has been carefully crafted by people of faith who have researched "climate-friendly" behaviour change and lived it themselves, but are also sincerely compassionate in their understanding of human frailty.

Faith communities are their primary audience, although all spiritual seekers are welcome to participate. With 84 percent of the world's population identifying with a religious tradition of some kind, there is great potential in appealing to these communities. They are connected to deep, ancient traditions which promote values around compassion towards others and not seeking out material comfort or wealth, which readily translate to low-carbon living. It is firmly hoped that these values may provide a foundation for popularising climate-friendly lifestyles.

Living the Change appeals to a wide range of values and beliefs as motivations for change, not only concern for the climate. For Christians, Jesus taught, "Whoever has two tunics is to share with him who has none, and whoever has food is to do likewise" (Luke 3:11). With His completely selfless life, He could still say, "My yoke is easy and my burden is light" (Matthew 11:30). Similarly, Mahatma Gandhi wrote:

A certain degree of physical harmony and comfort is necessary, but above a certain level it becomes a hindrance instead of a help. Therefore, the ideal of creating an unlimited number of wants and satisfying them seems to be a delusion and a snare.

Other traditions have similar teachings. People who belong to these traditions already belong to communities which value simple living over excess and, to a greater or lesser degree, they hold these values personally. The challenge Living the Change puts to people of faith is that they actually put such beliefs and values into practice.

Of course, that's easier said than done. Living the Change does not offer trite and simplistic solutions, but acknowledges that each individual's transition to simpler, more climate-friendly living is multi-layered.

To get into habits of eating more plant-based protein is difficult. To live differently from most people around you, is difficult. It's difficult to stand around the water fountain at work while others talk about their latest overseas trip, while you have made a decision the minimise air travel.

Living the Change attempts to offer scaffolding and community support for changes that individuals choose to make. Moralising is avoided but, instead, encouraging stories are offered, along with role models and conversations with others who are like-minded. People are encouraged to make smaller steps first, and then perhaps take a more ambitious one.

The emphasis is on potential emissions avoided from particular behavioural changes rather than on a person's total carbon footprint. It's accepted that people will struggle and sometimes not succeed. People are encouraged to make a commitment online, to talk about their commitment and the difficulties they are having. When successful, they can have their commitment affirmed by like-minded people and, as some stage, celebrated along with the commitments of others.

As people share with each other their experience of developing more climate-friendly habits, there is often a growing awareness of the co-benefits. Public transport may take longer but it's far more relaxing than sitting in traffic, and then having to find a parking space. Buying less saves you money. Eating less meat is better for your health, and travelling less is cheaper and less hassle. Habits we regret lead to a sense of being trapped, while it's more deeply satisfying to live out one's beliefs and values. Ultimately, one of those values is a safer future for all, especially for our grandchildren.

Living the Change is aimed to appeal to people of faith, but all are welcome to be part of this growing community.

Thea Ormerod is President of ARRCC, the Australian Religious Response to Climate Change, the lead organisation in Australia for the international Living the Change campaign. She is a practising Catholic, grandmother of eight, retired social worker and long-time advocate for social justice.