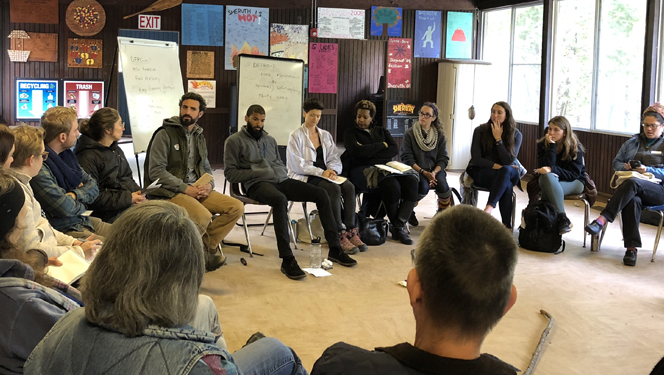 Hazon is grateful to share about the third annual JOFEE (Jewish Outdoor, Food, Farming and Environmental Education) Network Gathering, which was held at Tamarack Camps in Michigan on October 11-14, 2018. The event, which was the first major JOFEE happening held in the Detroit area, was a great success for all involved, with 162 participants and 48 speakers excitedly engaging with pressing issues around sustainability, food systems, gender, and Jewish connections to the land; diving deep into JOFEE teachings, wisdom, and emerging innovations.; exploring Detroit and the surrounding area while learning from local leaders dedicated to reviving land and neighborhoods; and experiencing Shabbat together, as one community, in the beautiful woods of  Tamarack Camps, which was an accessible and flexible partner in supporting our gathering.  During the gathering we took a tour of the Farber Farm on the property, and staff showcased produce from the farm during our meals. We also had a cookout the first evening of the gathering, and we used reusable bamboo utensils and compostable plateware.

The 4-day event was a strong representation of the values supported by Living the Change. Conscious steps were made to turn this into a green gathering. For instance, we watched Eating Animals and met with the farmer portrayed in the film, Frank Reece. We ate an all vegan meal, and when we did eat meat, it was only higher welfare chicken. When we ate eggs, they were only free-range eggs. We supported participant travel by offsetting the carbon expenditures partnering with an organization called This is My Earth (TiME). We cut down on printing program booklets. Hazon is appreciative to be the Jewish partner in Living the Change and is glad to share more about how we greened this meaningful event, as inspired by our own values of sustainability and those shared by our multi-faith partners.